Lipids = cholesterol and triglyceride – are insoluble in plasma and are transported in lipoproteins. 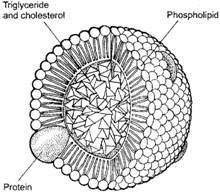 HDL is a small particle composed of phospholipid and apolipoproteins and produced in hepatic and intestinal cells.

HDL is thought to be anti-atherogenic and high HDL levels are cardioprotective.

This effect may be mediated by reverse cholesterol transport, a process whereby excess cholesterol in cells and in atherosclerotic plaques is removed and transported back to the liver.

Risk for myocardial infarction increases by about 25 percent for every 5 mg/dL decrement in serum HDL-cholesterol below median values for men and women.

Low HDL-cholesterol is a component of the metabolic syndrome that is characterized by obesity, insulin resistance, dyslipidemia, and hypertension

Patients considered high risk for cardiovascular disease based on HDL levels include: Cholesterol synthesis occurs in the cytoplasm and microsomes from the two-carbon acetate group of acetyl-CoA. 50% of the daily cholesterol production is converted to bile acids and salts and secreted in bile. Most of this re-absorbed and re-used by way of entero-hepatic circulation. About 0.5 – 1.0 g/day is used for the biosynthesis of steroid hormones (about 40 mg/day). A small part of cholesterol (about 50 mg/day) in adult is excreted also from the surface of the skin.

The process of cholesterol biosynthesis has five major steps:

Three molecules of acetyl-CoA are condensed and converted to 3-hydroxy-3-methyl-glutaryl-CoA (HMG-CoA).

HMG-CoA reductase catalyzed the conversion of HMG-CoA to mevalonate is the rate –limiting step in cholesterol biosynthesis in which cholesterol act as an allosteric inhibitor of gene expression of the enzyme.

Mevalonate is converted in several enzymatic steps to the isoprene based molecule, isopentenyl pyrophosphate (IPP) and is the key five-carbon isoprenoid intermediate in cholesterol biosynthesis, with the concomitant loss of carbon dioxide. IPP is also precursors in the synthesis of coenzyme Q (ubiquinone) and dolichol , which function in the synthesis of carbohydrate side chains in glycoproteins and another important biomolecules such as vitamin E , K and carotinoids.

Conversion of Squalene to cholesterol (a 27- carbon molecule) requires several reactions , some of them with unknown mechanism till now and involved the reducing equivalent NADPH and molecular oxygen ( mixed – oxygenase system).

The acetyl-CoA utilized for cholesterol biosynthesis is derived from an oxidation reaction (e.g., fatty acids or pyruvate) in the mitochondria and is transported to the cytoplasm by the same process as that described for fatty acid synthesis. Acetyl-CoA can also be derived from cytoplasmic oxidation of ethanol by acetyl-CoA synthetase. All the reduction reactions of cholesterol biosynthesis use NADPH as a cofactor. 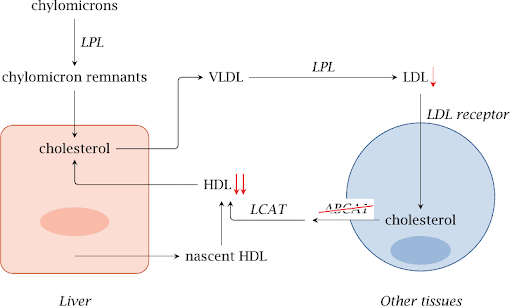 Tungiasis is an inflammatory skin disease caused by infection with Chronic Myeloid leukemia (CML) belongs to the group of myeloproliferative Septoplasty or alternatively submucous septal resection and septal reconstruction, is where is Ldl Metabolism