Dermatophagia (from Ancient Greek δέρμα – skin – and φαγεία – eating) is a compulsion disorder of gnawing or biting one’s own skin, most commonly at the fingers. This action can either be conscious or unconscious. 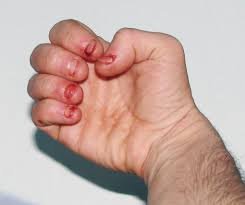 Those affected with dermatophagia typically bite the skin around the nails, leading to bleeding and discoloration over time. Some people also bite on their skin on their finger knuckles which can lead to pain and bleeding just by moving their fingers. It has been proposed that dermatodaxia would be a more fitting term for this disorder, as the suffix ‘-phagia’ implies that the skin is being eaten rather than simply bitten. In most cases of dermatophagia in humans, the skin is only bitten with no consumption. In herpetology, dermatophagia is used to correctly describe the act in which amphibians and reptiles eat the skin they shed, but this is not what occurs in humans. Those diagnosed with this disorder do not develop wounds on the bitten areas of their hands or lose any skin. Instead, they experience a thickening of the skin being repeatedly bitten. This information implies that the skin is simply being bitten and chewed rather than eaten. Contemporary research suggests a link between impulse control disorders and obsessive–compulsive disorders, and this was addressed in the DSM-5 when dermatophagia and other related disorders were classified as ‘other specified obsessive-compulsive related disorders’ and are given the specification of body focused repetitive behavior. Further information on OCD, other anxiety disorders, dermatophagia and other related body focused repetitive behaviors can be found in the DSM-5. 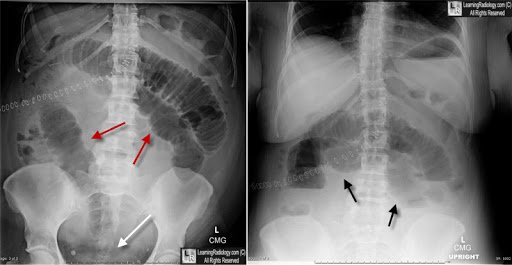 A 33-Year-old woman presents to the emergency with diffuse, cramping