It is a triangular shaped area present in the anterior thigh through which neurovascular structures pass. It is also known as Scarpa’s triangle. 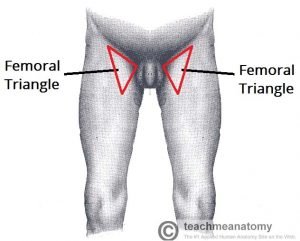 As this area is a triangle, it has three borders:

Superior border – Inguinal ligament, a ligament that runs from the anterior superior iliac spine to the pubic tubercle.

Lateral border – Formed by the medial border of the sartorius muscle.

Medial border – Formed by the medial border of the adductor longus muscle. The rest of this muscle forms part of the floor of the triangle. Anteriorly – the roof of the femoral triangle is formed by the fascia lata.

Posteriorly – the base of the femoral triangle is formed by the pectineus, iliopsoas and adductor longus muscles. 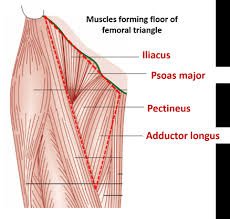 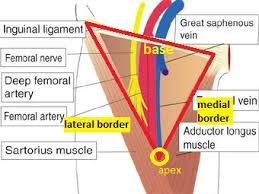 The femoral triangle contains some of the major neurovascular structures of the lower limb. Its contents (lateral to medial) are:

Femoral nerve – Innervates the anterior compartment of the thigh, and provides sensory branches for the leg and foot.

Femoral artery – Responsible for the majority of the arterial supply to the lower limb.

Femoral vein – The great saphenous vein drains into the femoral vein within the triangle.

The femoral artery, vein and canal are contained within a fascial compartment – known as the femoral sheath. Swellings in the femoral triangle caused by:

Aneurisms of the vessels Scleromalacia perforans is a rare form of anterior scleritis represented Importance of fibre in our diets

Most people refer to fibre as bulk or roughage. These As long as medical schools in Asia keep on repeating

[…] sheath is located in the femoral triangle which simply tells us that muscles such as the iliacus ,psoas major and pectineus muscles run […]